During the period, renegotiations and lease extensions corresponded to 185,000 square metres (171,000) and annual rent of SEK 485 million (473), resulting in an increase on the previous rent payable of 8.3% (13.9). The Swedish Medical Products Agency has extended its lease at the Uppsala Science Park property for slightly more than 20,000 square metres for a period of six years and Försäkringskassan (the Swedish Social Insurance Agency) has signed a six-year extension to its lease at the Godset property in Sundbyberg for 7,300 square metres.

“The strong rental market we noted at the start of the year has changed and become more cautious for natural reasons. Nonetheless, we signed new contracts during the second quarter for SEK 111 million or 35,000 square metres. In these market conditions, being able to present such a strong performance in underlying operations is worthy of particular note. Moreover, we also have solid occupancy rates for our properties, both project and investment,” says Johanna Skogestig, CEO of Vasakronan.

During the period, Vasakronan issued SEK 6.6 billion in green bonds and arranged a green loan agreement of SEK 2 billion with the EIB. The loan supports the new construction and renovation of five properties in Stockholm and Uppsala, all of which have a low energy consumption and climate impact. The bond issues, new bank loans and the deferral of the proposed dividend leave Vasakronan in a stable financial position.

Vasakronan’s solar park in Uppsala was completed in June. On entering into operation in August, it will deliver around 4 GWh of electricity on an annual basis. Increasing the share of own-produced electricity is a key element of the company’s road map for becoming climate neutral across the value chain by 2030. 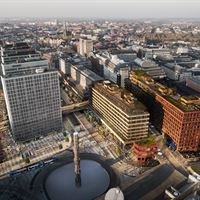